How to Land at Zero on a Drifter Hole

Have all brackets showing on your overview and warp to a uni. Imagine a straight line running from the beacon through the wormhole and out into space. Check if there are any celestials near this line (hereafter called the line of syzygy or LoS).

If there's a rare jackpot celestial on (or within a few degrees) of the line of syzygy, you can just warp straight from that celestial to the uni at 89 km and you'll land in jump range of the hole.

IMMEDIATELY RESET THE DEFAULT "WARP TO WITHIN" RANGE TO ZERO AFTER WARPING TO THE HOLE.

If the only option's near but not on the line, warp there and back to the uni. Drop a nearby offgrid bookmark as you warp back. The closer it is to 12000 km from the beacon without seeing the wormhole, the less you'll have to burn.

Once you get a bookmark within 12-15K km, MWD from it toward the LoS. Once you've gone ~500 km, drop another bookmark, warp back to the hole and judge how far and in what direction you have yet to burn. Keep doing this (and use your best judgement as to how far to burn between checks) until you get a roughly straight line between beacon, wormhole and bookmark.

If no celestials are near the LoS, look out towards the edges of the system. If there are two celestials in front of the beacon and roughly on opposite sides of LoS, warp between them and drop bookmarks as you cross (or near) the LoS. Then repeat the above fine-tuning steps from your near-syzygy bookmark. You can also use three celestials if that'd save MWDing time.

Note: there won't always be handy celestials like this. More on that below. Here is a clip showing the line of syzygy in 3D and showcasing a lucky situation.

I had a pre-existing non-Drifter wormhole bookmark in the system which, by chance, was nearly in syzygy (the line of syzygy being represented by the dscan cone). My next best option would've been the planet behind the yellow outgate, i.e. this one: 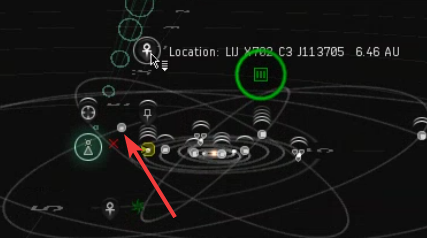 If the wormhole were at the indicated planet instead, the LoS would point out into empty space and there would be no warpables to either side between which to drop a bookmark near the line. This is often the case with Drifter holes, and you're SOL unless you want to grab something fast (e.g. a 10 km/s Punisher) and burn out along the LoS for ~25 minutes until you leave the grid.

Don't burn off a Drifter grid if an op's using the hole within 20 minutes. Drifters chase you at 3.5 km/s and then can get buggy and become unable to warp back to the hole and jump as they normally would. They can't DD beyond 250 km, but their being stuck on the grid is a nuisance.

If syzygy bookmarks aren't viable, you can set up to warp in and microjump (DANGEROUS):

Warp to a celestial behind the beacon. Warp from it to the uni at random nonzero distances until you land 103 km from the wormhole. Open Notepad and drag in the celestial you used and type in the warp range that landed you at 103km. Set your warp-to distance back to zero before you leave!

If you microjump to a wormhole from 104.x to 96.x km away, you'll land in jump range (WH jump range is 5 km). You can anchor an MMJU, use a CD, or MJD with your DST/BC/BS. Bear these things in mind:

1. you always land somewhere on 5 km diameter sphere centered on your warp-in point
in other words, you always land at warpables at your warp-to distance ± 0-2500 m
2. you need time to align to the hole (which varies with skills, hulls and fittings)
3. you need additional time to spool the microjump (5-12 s depending on skills/module)
4. during align and spooling, Drifters can appear and hit you with Lux Kontos/Xiphos in two seconds
like these, or these, or these. risky!